In case you haven’t noticed yet, I decided to give my blog a makeover. New look, new title.

My prior theme (as they call the background/layout, as I’m sure you know), Koi, was in place for about two years. Three years? Anyway, a pretty long time. I liked everything about it except that it was so popular that as I browse others’ blogs, I’d come across it and get this strange sense of –I suppose deja vu is the correct term. Something that seems familiar, but isn’t. It’s like a pod-blog. Looks just the same, but with different content. I chose this one, which is simpler in color scheme and appearance, with slightly more customizable options. I found that picture of the tree on some public domain site. That picture might not be around long, so enjoy it while you can (if you like it, that is. Do you like it? If you don’t, feel free to tell me. I’m open to your input.)

The title is NOT about the internet being not physically there or anything so trite. You should be relieved to hear that.

The new title, Between Worlds, has two meanings. It refers to 1) bouncing between the work/chore/necessity aspects of my life and the writing/dreaming/anything I actually want to do parts. The trick is to make the creative part of my life make me money, so that my creative life and my professional life can be joined, but I haven’t managed this yet. In the meantime they really feel like two different worlds… 2) Traveling between the worlds of different pieces of writing, or different parts of the same work. Ever read Invisible Cities by Italo Calvino? If not, you should, it’s an awesome read. Anyway, think of it like that.

I feel the need now to discuss how difficult it is to choose a theme for a blog. There are so many options, and for the most part one is really no better than the next. The deciding factor, I guess, is which one “speaks to” you when you’re deciding how your blog should look. I honestly don’t know how many pages of options you could scroll through, because I don’t believe that spending several hours trying out every possible theme is a great use of time, so I’ve never gotten to the end. Like I said, one theme is not that much better than any other…

Of course that doesn’t mean I could just pick any old one and apply it to my blog. No, it does have to feel right. The key points of theme selection, for me, were as follows.

In the “browse themes” page, I sorted by “newest.” I figured, most likely without any factual or statistical basis, that fewer other blogs would have the newer themes. I believe this would be called flawed logic, but I thought at the very least I would find themes I had not seen yet, so I just went with it.

I only looked at the free options, which narrowed things down. The choice to pay extra for certain blog features probably makes plenty of sense for some people, but on my budget it just doesn’t work. I need to eat this month, you know…

So then, within those constraints, I had to decide between different types of themes. There were two real considerations here: layout and color scheme.

Layouts like this one, which show the posts or summary in a sort of standard, book-page form, linear and very readable, are the best choices for a writing blog. (At least, I think so.) For some blogs, the home page with multiple boxes laid out side by side with different posts is a great way to browse, but for me it’s just too busy. The writing itself is the draw here, not a fancy design. I don’t want my content to be lost in all the little boxes.

Out of the themes that are designed in a similar layout, I then had to choose a color. Koi had a nice soft coral background, which was one of the things I liked best about it. I know that I don’t like to look at a website with a very bright background for more than a few minutes; I don’t want to drive away my readers with the blinding glow coming from the computer screen. Then again, although I liked some of the darker themes, having too dark a background does not seem too welcoming. I don’t want to come to my own blog and see this dark screen. The world’s a dark enough place already. (For some people, the dark background works great. I’m happy to read your blog on any background you choose.)

The theme I chose is a little brighter perhaps than I would have liked, but the gray softens it, making it easier to stare at for long enough to read the first two chapters of my Helen of Troy novel (under the “Helen” tab). The other aspects of the design were pleasing enough for me, and there are quite a few custom options, meaning that I can make it feel more personal.

Any other features, like headers, title font, where the tabs appear, or funky pictures, were mostly irrelevant to my selection process. They were items to be dealt with if they were attached to a theme I liked, but not what I sought out. After Koi’s very pretty but rather intricate borders, I felt it was time to simplify.

Much like I should simplify in real life by sorting through all my crap. But that’s a story for another time… 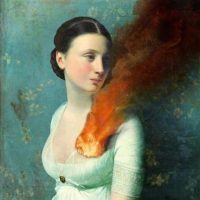