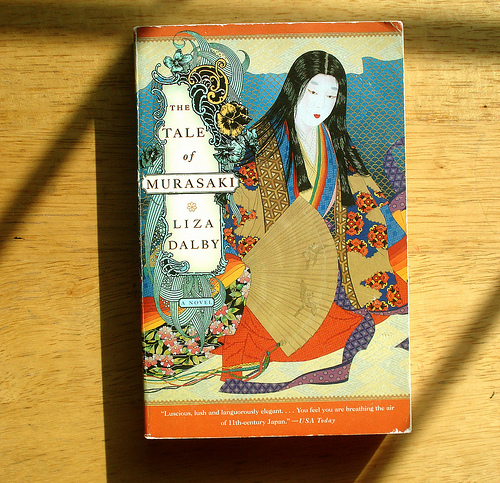 I’ve been reading The Tale of Murasaki by Liza Dalby for some time now. On some days I’ll sit and read 50 pages, others only 5, making the going overall rather slow. I’m about halfway through now, and having made an observation that I find interesting, decided to share it.

This book is description-heavy. On every page there is some description of the surroundings, so much imagery that the book is like an overstuffed furniture piece of a story. Now, I’m not saying this is a bad thing. On the contrary – overstuffed furniture tends to be very comfortable – the kind you can sink into and not want to leave for hours. And, as the story is told from the point of view of a writer (and we tend to be observant people), the extreme level of imagery is not out of place. I only notice because it’s not common to have quite that much description.

I recollect that even in other books that do seem to describe the scenery quite often, the author will give you enough to picture where the characters are and then move on. While seamlessly weaving in plot and dialogue among the bombardment of images, Liza Dalby seems, at times, to continuously remind you where Murasaki is. (Or, Murasaki constantly reminds you/herself of where she is.) It emphasizes Murasaki’s awareness of the world. I do think it’s brilliant, and the writing is so artful that it doesn’t get old – not to mention how beautiful a picture of Japan is created by the descriptions. It seems to me, as well, that it takes an extra dose of dedication to keep up such an approach throughout a 400-500 page book.

Now, out of curiosity, I ask: Would you have noticed such a thing in reading this book? Would you have thought it important? Do you think that too many writers get sidetracked with descriptions? – Because I think that a lot of writers do get caught up in telling the reader exactly what a character or world looks like, before they give us cause to care. While description is a good writing excercise, I think it shouldn’t dominate the writing. If you don’t have the content to go along with it, all the pretty pictures in the world will not, in fact, make the story good.

That is not to say that, sometimes, description can’t be an entire story. Flash fiction, at least, could utilize this idea.

2 thoughts on “Thoughts on Reading: The Tale of Murasaki”